Windows 10 S forces you to use Edge and Bing 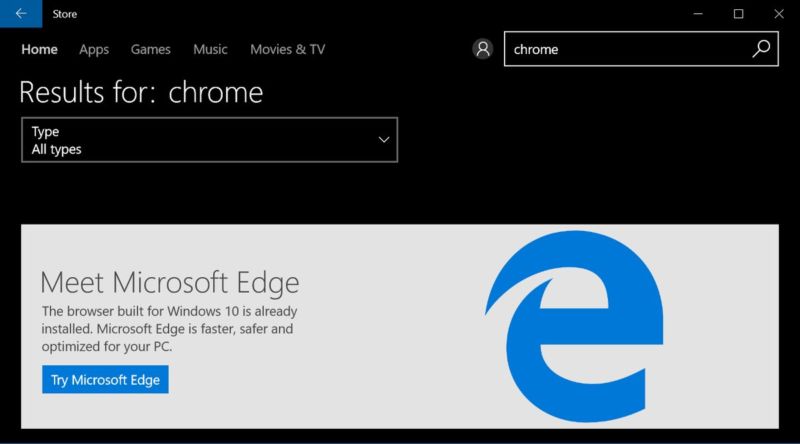 Windows 10 S, Microsoft’s new locked-down operating system that comes bundled with the Surface Laptop, won’t allow you to change the default Web browser away from Microsoft’s own Edge. Furthermore, Edge’s default search provider can’t be altered: Bing is all you get.

Curiously you can download other browsers from the Windows Store, such as Opera Mini, but Windows 10 S won’t let you set it as the default browser: if you try to open an HTML file, or click a link in another app, it will always open in Edge, according to Microsoft’s official FAQ on the topic.

The FAQ uses very direct language: “Microsoft Edge is the default web browser on Microsoft 10 S. The default search provider in Microsoft Edge and Internet Explorer cannot be changed.” It isn’t clear if OEMs will be able to override this feature of Windows 10 S.

It’s worth noting at this juncture that Windows 10 S, much like its spiritual predecessor Windows RT, will only run apps that you download from the Windows Store—and currently, neither Firefox or Chrome have been packaged up for the Windows Store. I can’t imagine that Google will be super-keen to bring Chrome to the Windows Store if Windows 10 S users can’t change the default browser.

Handily, though, if you search the Windows Store for an app that isn’t available—such as Chrome—the Store will sometimes prompt you with an app from the same category. See the image at the top of the story for an example.

You can ostensibly defend Microsoft’s choice to lock down the Windows 10 S browser as some kind of security- or performance-boosting measure. But not being able to change Edge’s default search provider is a very odd move indeed. Setting the default search provider to Bing is one thing—and what most people would expect—but not being able to change it to something else will probably come as a surprise to many Windows 10 S users.

18 of the initial 20 Surface Laptop territories are in continental Europe, where Bing has almost zero market share and Google rules the roost. Bing has historically been rather bad at non-English (or even non-American) search, but presumably Microsoft feels that its search engine is now proficient enough that its European Windows 10 S users won’t be disappointed.

Who knows: following another EU antitrust ruling in a few years, maybe Microsoft will have to roll out yet another Web browser and search provider ballot for Windows 10 S.